The comfort of parents whose new-born babies are receiving care at a North-Staffordshire hospital has been improved thanks to charity funding.

The Neonatal Intensive Care Unit (NICU) at the Royal Stoke University Hospital has been able to refurbish its family rooms and bereavement suite after receiving a grant from UHNM Charity.

The Unit’s six family rooms, a mixture of twin and double rooms, enable parents to stay close by to their baby during treatment, support feeding and strengthen parent-baby relationship before they are discharged home.

The newly-furnished bereavement rooms will ensure staff can care for parents in a quiet and comfortable space, supporting them while they spend time with their baby.

Katy Edwards, Neonatal Intensive Care Sister said: “The improvements made to our bereavement and family rooms, thanks to support from UHNM Charity, will benefit the babies and their families during their most difficult times.

“When we first started this process, the bereavement rooms were extremely bare, unwelcoming and mismatched. Our aim was to create a more homely, comforting and caring space to provide parents and their families with a dedicated area away from the rest of the neonatal unit, to spend time together while they begin to start the journey of loss and spend precious last moments with their baby.”

Katy added: “The bereavement room project was a collaboration between myself and colleagues including Nicola Ashdown, whose passion was bereavement care. To have facilities like this was always her vision. Unfortunately, Nicola sadly passed away and she didn’t get to see that in her lifetime, but we did it in her memory and the memory of the babies and families who needed the service during their neonatal journey.”

NICU is based within the Royal Stoke Maternity Centre and offers care for up to 26 babies and their families. The unit has six intensive care cots, six high dependency cots and 14 special care cots.

Speaking about the family rooms, Katy said: “As we are a Level Three Unit, which means we provide treatment for babies and their families from not just the local area but nationally. It is vitally important these families have a comfortable and welcoming place to stay whilst their baby is receiving treatment.

“Our previous rooms were adequate and comfortable but we wanted to improve that patient comfort to the same standard in each room as they are occupied ninety-per-cent of the time. We listened to feedback from families about what would improve their experience with us and have acted upon this by including items such as more comfortable beds, lights that dim and more storage. We’ve even installed clocks that don’t tick to help ensure a best night’s sleep as possible.”

Katy added: “We’ve had really amazing feedback and thrilled we’ve been able to see this through with the help of UHNM Charity. We’re grateful for our supporters for enabling us to carry out the work- we felt it was an investment for the future and buying quality was the way forward.”

The refurbished rooms have been well received by patient’s families, like Summer Lazenby from Cheadle, whose son Leo received treatment on NICU after being born 12 weeks premature.

Summer said: “I had a very premature baby that we didn’t know was due. We were a bit worried because you don’t know what to expect but the family rooms meant we could stay with Leo for the first eight nights he was in the Unit. It meant I could go and lie down and have a moment away from the clinical environment. It was nice and relaxing, there was a chair and bed and my partner could come and sit with me and stay.”

“It was a place to go for a break and put the telly on to watch something that was absolutely ridiculous but know if we needed to that Leo was nearby. Nurses could come to us in person in the room to update us rather than over the phone. You don’t know you need this until you really need it.”

Speaking about donations to NICU Katie added: “We’ve been lucky to have the continued support of families such as the Hess family Seb and Sharlene Hess from Shrewsbury, their family, friends and supporters raised funds in December 2020 for the Neonatal Unit.

“Primrose their daughter sadly passed away on the NICU and the family were able to spend time with their daughter in the bereavement suite.  They recently visited the Unit and the suite and were able to see where their items would be placed. They are planning more fund raising activities over the next year and beyond.” 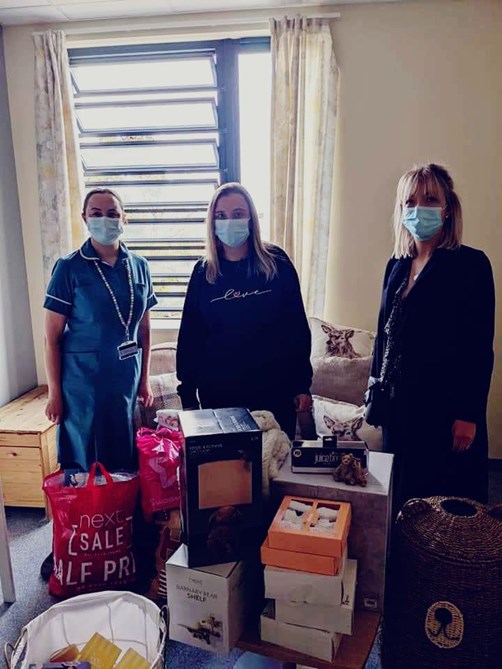 The family held a Santa Village Run in their local area, dressed as Santa and his elves, with a decorated a sleigh, delivering presents to children in their village, and collecting donations. They raised £800 and have generously donated many items to the bereavement suite, such as soft furnishings, lighting and decorations.  They recently visited the unit and the suite, and were able to see where their items would be placed.  They are planning more fund raising activities over the next year and beyond.