Members of Trentham Golf Club have raised more than £8,500 for UHNM Charity thanks to the fundraising efforts of their former Lady Captain.

Angela Peak held various fundraising events throughout her captaincy between March 2021 and March 2022 raising £8,784.66 for Wards 201 and 202 at University Hospitals of North Midlands NHS Trust’s (UHNM) Cancer Centre who treated her husband David.

Angela said: “My husband David was diagnosed with late stage 3 throat and lymph node cancer in May 2020, only a few weeks after I was elected and signed in as Lady Captain. He underwent extensive tests, over 280 hours of chemotherapy and 30 sessions of radiotherapy. Our life was turned upside down. David couldn’t swallow, eat, talk and struggled to breathe at times as his throat was so badly damaged. He lost three stone in two weeks and became very weak. 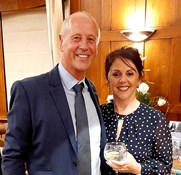 “This was all made a hundred times worse as it was all during lockdown so we had to completely isolate from family and friends from July to November only being able to have contact with hospital staff. This was particularly hard for our daughters who were desperate to see their dad. David’s sheer willpower and strength was unbelievable. Despite having a feeding tube he was determined to eat for himself and he found the power of his mind to be of immense help, holding blue healing stones our daughter gave him.”

She added: “The treatment and care that David received at UHNM was outstanding, and we cannot thank the consultants, doctors, nurses and support staff enough. We wanted some way of saying thank you most sincerely.”

Angela held various events throughout her captaincy to fundraise for Wards 201 and 202 through UHNM Charity including golf competitions, an art demonstration and fashion show, but it was her Christmas advent she is most proud of.

She said: “Members of the golf club very kindly sponsored each day of December right up to Christmas Eve with what I can only describe as phenomenally generous prizes. I then sold at £20 per person and attended the club daily where a member would draw a prize winner and I had the delight in letting him or her know. The excitement within the club was awesome as not only did members of the club have a chance of winning a prize, but they were supporting a very worthy cause close to a lot of people’s hearts as many members had been touched by cancer in some way. This advent alone raised over £5,500.”

Angela said her time as Lady Captain at Trentham Golf Club had been a privilege and honour.

“The camaraderie and friendships made are second to none. It's a wonderful course and playing golf with friends is wonderful therapy. My support of UHNM Charity was so well supported by all members as they saw David struggle and then get better and come back fighting, even cutting his handicap,” she added.

David is now making a recovering on and off the golf course and is now able to walk the full 18 holes regularly and has even won the odd competition.

Angela said: “Coming second on President’s Day and receiving his prize to a standing ovation, cheers and whistles was a very moving and emotional experience.”

She added: “Wards 201 and 202 at UHNM’s Cancer Centre looked after David so well, and I hope my fundraising will make a massive difference to patients, supporting them in care and equipment and making a very difficult time more bearable.

“I would like to thank all members and staff at Trentham Golf Club, as well as family and friends who supported us and donated to the charity. My successor is also supporting UHNM’s Neonatal Intensive Care Unit- we are so very fortunate to have such wonderful, pioneering facilities within our County.”

Steve Rushton, Head of UHNM Charity said: “We’re delighted that Angela supported our charity so magnificently throughout her captaincy, raising a fantastic amount for cancer services at UHNM. Every penny raised will help improve the care and experience of our patients.”